011925: Book #17 of this popular Series. Covers and pages are clean, unmarked, bright, tightly bound and sharp cornered (except for light creasing at cover corners and on spine). Scarce, Out Of Print, Book. Original Price of $1.50 and lists to #34 on Titles List. Beatrix "Trixie" Belden is a young teen girl who lives near the fictional town of Sleepyside-on-Hudson, in the Hudson Valley area of New York. She lives at Crabapple Farm with her parents and three brothers, Brian, Mart, and Bobby. Throughout the series, Trixie and her friend Honey Wheeler, solve mysteries that have baffled authorities. Trixie's beautiful cousin Hallie arrives at Crabapple Farm for a visit; she and Trixie have been rivals all their lives. Also, Jim's cousin, Juliana, is planning her wedding to be held at the Wheeler estate. Then, Diana's house is robbed, the first in a string of burglaries. Why does Dan seem so disturbed by it? And who is the mysterious Miss Ryks who wants to be invited to the wedding at Manor House? Trixie's got her work cut out for her. "When Trixie could stand the waiting no longer, she went after Bobby. The instant she opened the kitchen door, she was grabbed. A hand was clamped over her mouth. ..." If interested, I have several other volumes available in this Trixie Belden Series.: Vol. 17: Cover Art: 5 x 7.5 in.: 212 pages 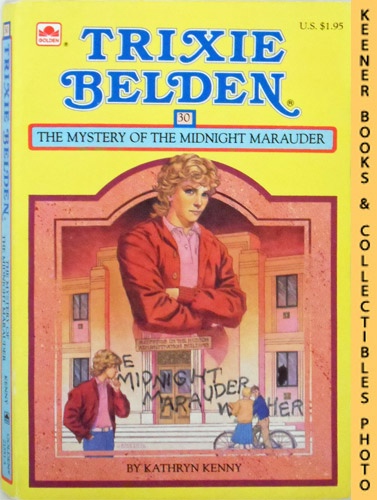